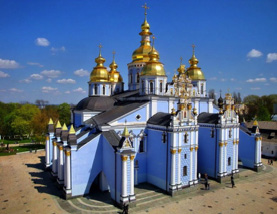 November 21 has long been an important date on the calendar for Ukrainians, but since 2013 it has taken on additional significance. On the evening of the 21st in 2013 over a thousand people began a protest in the central square in Kyiv, condemning the decision of the Yanukovych government to back away from an earlier decision to enter into an Association Agreement with the European Union. This government’s rejection of Europe, back into the arms of Russia, was widely condemned in Ukraine, but particularly by university students who took to the streets. No one expected the first protest to swell into a massive revolution of historic proportions. In a violent attempt to scatter the protesters, the authorities brutally attacked in the night of Dec. 10-11. In support of the protestors the bells of St. Michael’s Cathedral sounded, waking the citizens of Kyiv, and calling them to the Maidan. In response thousands came in support and joined the student demonstrators! A few weeks earlier the monks of St. Michael’s had opened their door to demonstrators offering them food and a place to sleep, but on that December night their care and hospitality took on new meaning: in the middle ages the bells of St. Michael’s had rung to warn Kyivites of oncoming attacks by Tatars – now they rang announcing the need to rise up and claim their rights as free citizens in a free Ukraine!

St. Michael’s patronage over Kyiv could not be clearer!